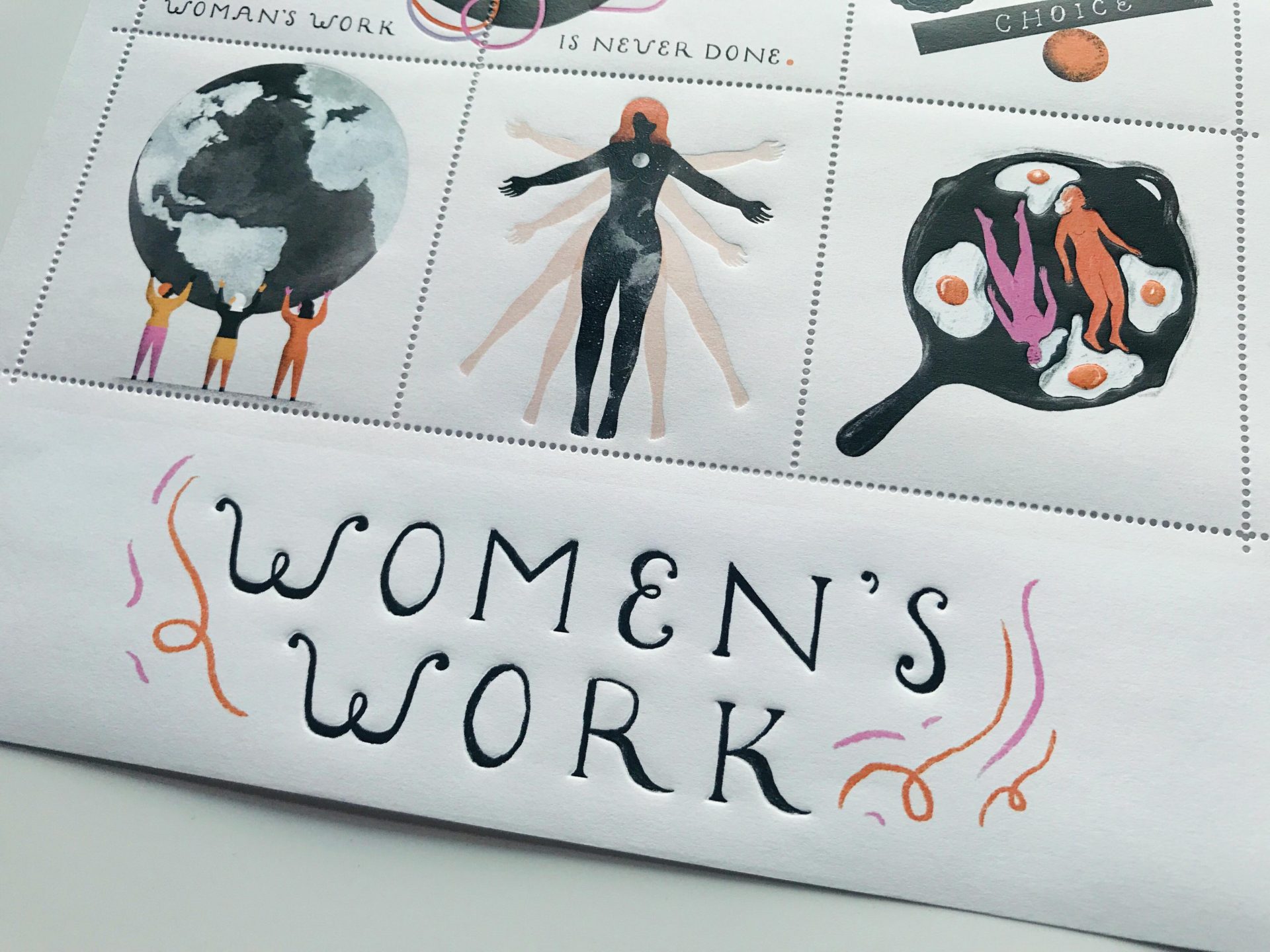 Simona is an illustrator and designer based in rural upstate New York. She immigrated to the United States as a child from Romania. The only thing she ever stole was a pocket sized illustrated book (from a family friend and it was promptly returned). She aims to spread the magic of visual narrative through print, public art, children’s books, and all available mediums.

What was the most interesting or fun aspect of designing a poster stamp?

Designing and creating stamps is truly a dream come true. It was an honor to create a female-focused set of stamps amplifying women’s issues + voices.

What unique challenges did it present?

Creating a unified look and size to the stamps while keeping within the theme but also retaining a fun and positive vibe.

No. I had been working on larger scale work, creating vinyl murals most recently. This seemed like a radical change of pace in designing a more intimate and tactile experience.

I was exploring the idea of “women’s work” and celebrating the strength and resilience of women for International Women’s Day on March 8. The constant juggling and striving of women to create space at the workforce table while still retaining the freedom to make their own reproductive choices influenced one of the stamps.

As a working mother, trying to find a place for personal creative output and space within the confines of being a professional and a mom has been an awkward dance at times. Both aspects are important to me, and both have been the privilege of being my choice.

The heavy task of women’s invisible, domestic work outside of professional work weighs heavily on what a woman is able to achieve creatively, professionally and personally based on the support around her. Women are literally holding up the world so to speak, during the recent pandemic, and make up as much as 77% of the frontline health care workers in the US and over 50% of the education workforce, yet many struggle with pay parity and sufficient support for things like maternity leave and childcare.

These are some of the themes that were the initial spark of the creation of the women-focused stamps. Coming across the historic female laundry workers’ union led by a 19-year-old woman, Kate Mullany, in 1864, in Troy, New York, inspired one of the stamps. Violence against women in all forms based on gender like the global prevalence of femicide was another theme woven into the collection.

The idea of a woman being able to do it all has been compounded most recently in the working from home imbalance; [that is] another influence on the stamps. The connection of woman to the cosmos and human life in general was another inspiration. Overall, the stamps celebrate and amplify women’s voices and work as creators, mothers, professionals, and survivors.

Support and equality for women’s work both personally and professionally in all its forms is an ongoing struggle. During the recent pandemic, it has become more obvious than ever that women hold up the world on so many levels. My hope is that more employers and governments begin to see the need for pay parity, paid maternity leave, flexible work schedules, and generally valuing women’s rights and choices globally. 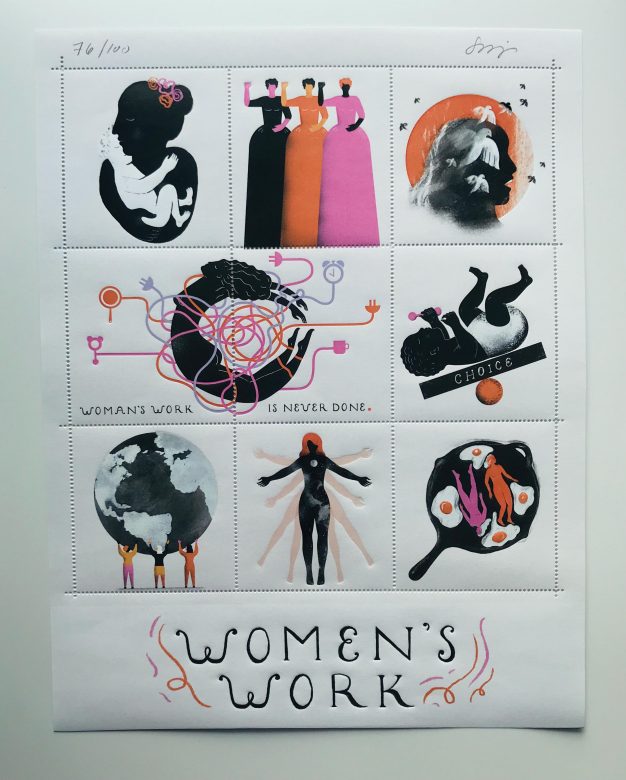 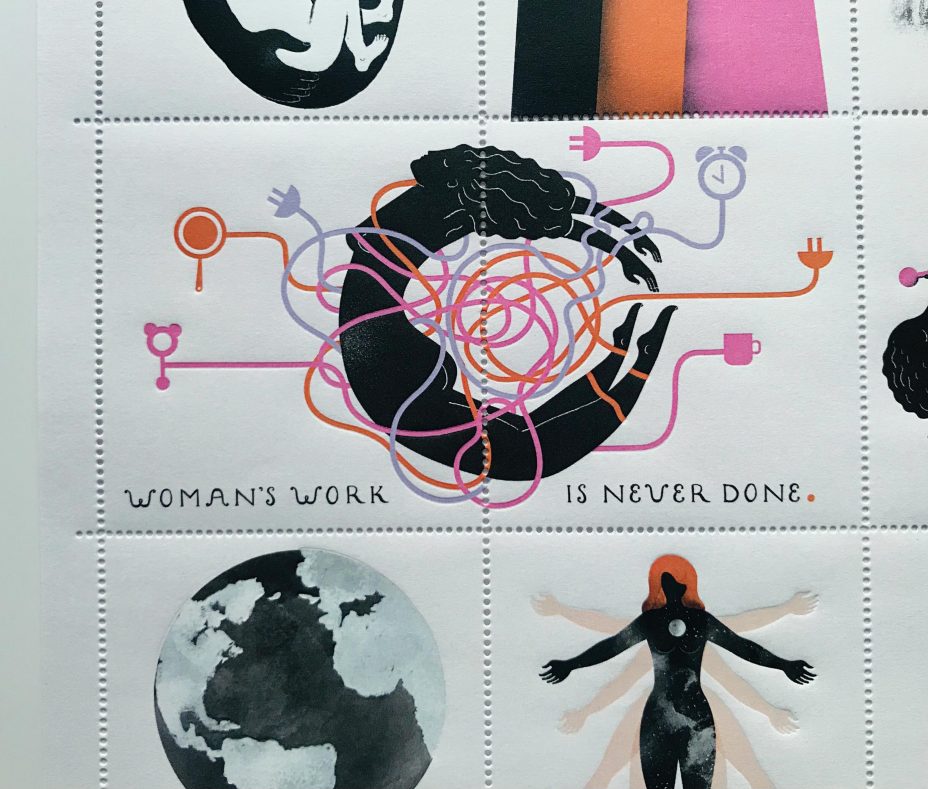 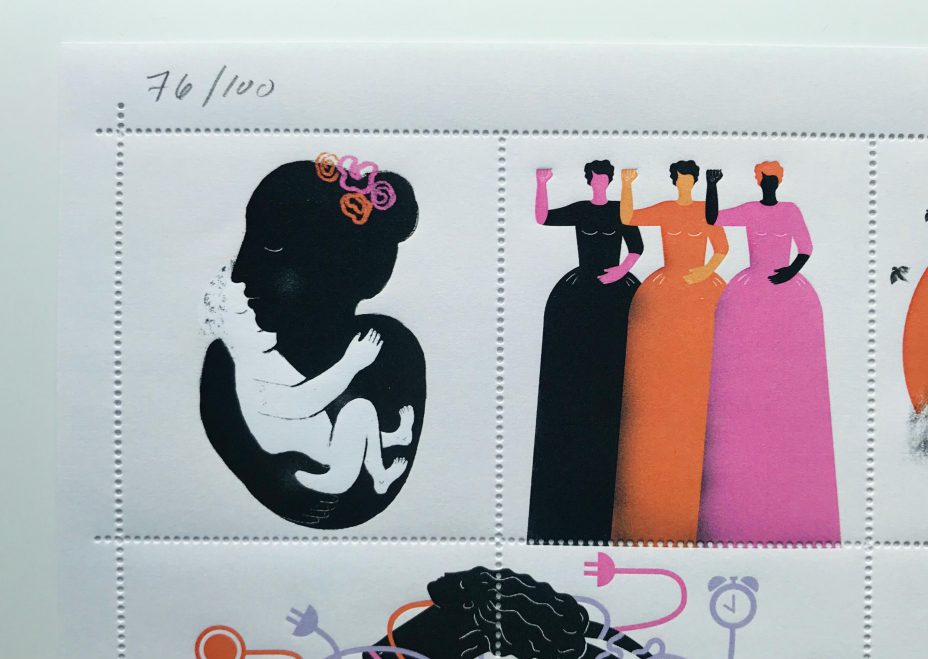