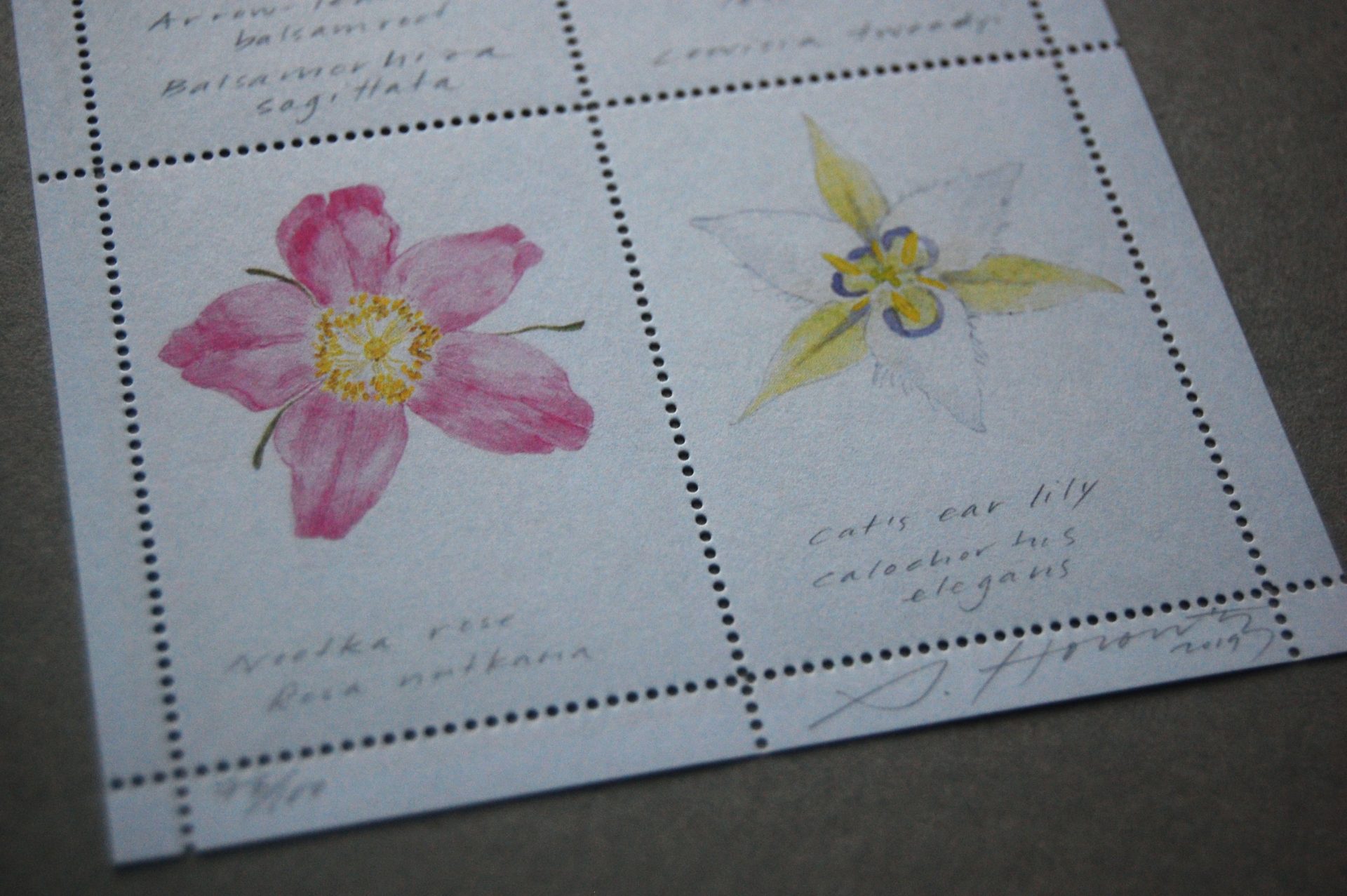 Sarah Horowitz is an artist and printmaker living at the base of the eastern Cascade Mountains in Leavenworth, Washington. Her artist books are in public and private collections throughout the world, including the Library of Congress, Portland Art Museum, and  Yale University’s Bienecke Library. She’s been drawing and making art her entire life, finely attuned to the world around her.

I have never designed a stamp, but after having designed and created several artist’s books, the stamp felt like a succinct mini series.

I think that the most fun parts were also the most challenging. The limitations of size and lack of additional pages or presentation space for text was difficult. I wanted to come up with something that both tied into the work I am making and into something that matters in our world today. It was hard to choose what direction to take since I kept coming up with more ideas – all disparate and exciting.

Much of my work links to a sense of place through botanical subject matter and I am deeply concerned about our growing climate crisis. Shifts in temperature and rainfall are already affecting habitats and growth area for native plants. A previous project of mine focused on native plants, so I got to know the character of my new home through the native flora (I’ve now lived in Leavenworth, Washington for five years). I chose to highlight some of the most spectacular native species for this project, but I made my final choices based on design. I wanted flowers that I could draw in a circular-ish format to fit within the square space of the perforations and the text, so not vertical representations of flowers as they are frequently depicted.

While not related to any of my previous work, it recently occurred to me to do a series of drawings of faces of some of the kids held in detention at the border. It would make an excellent stamp project and maybe the visibility would cause more people to respond to the devastating actions of our government.

Your idea about the portraits is great. If you want to do portraits as a benefit project, we’d be very happy to help produce them. What’s happening is deeply troubling.

I like the benefit idea. Would love to make the portrait idea happen.

Note: we continued actively working with Sarah on her idea. What materialized about eight months later was a benefit stamp for Families Belong Together entitled “Close the Camps.”

Sarah said: I continued investigating but never found a great way to do the stamp with portraits of kids that wouldn’t end up going sideways. I made this drawing with the same idea but using my own background so not taking someone else’s story. It still is aimed at the incarceration of immigrants, especially kids. 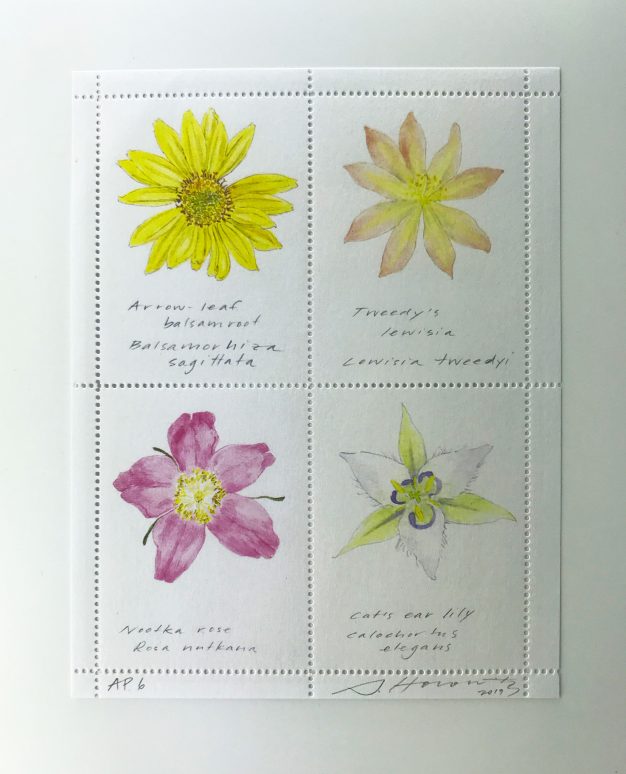 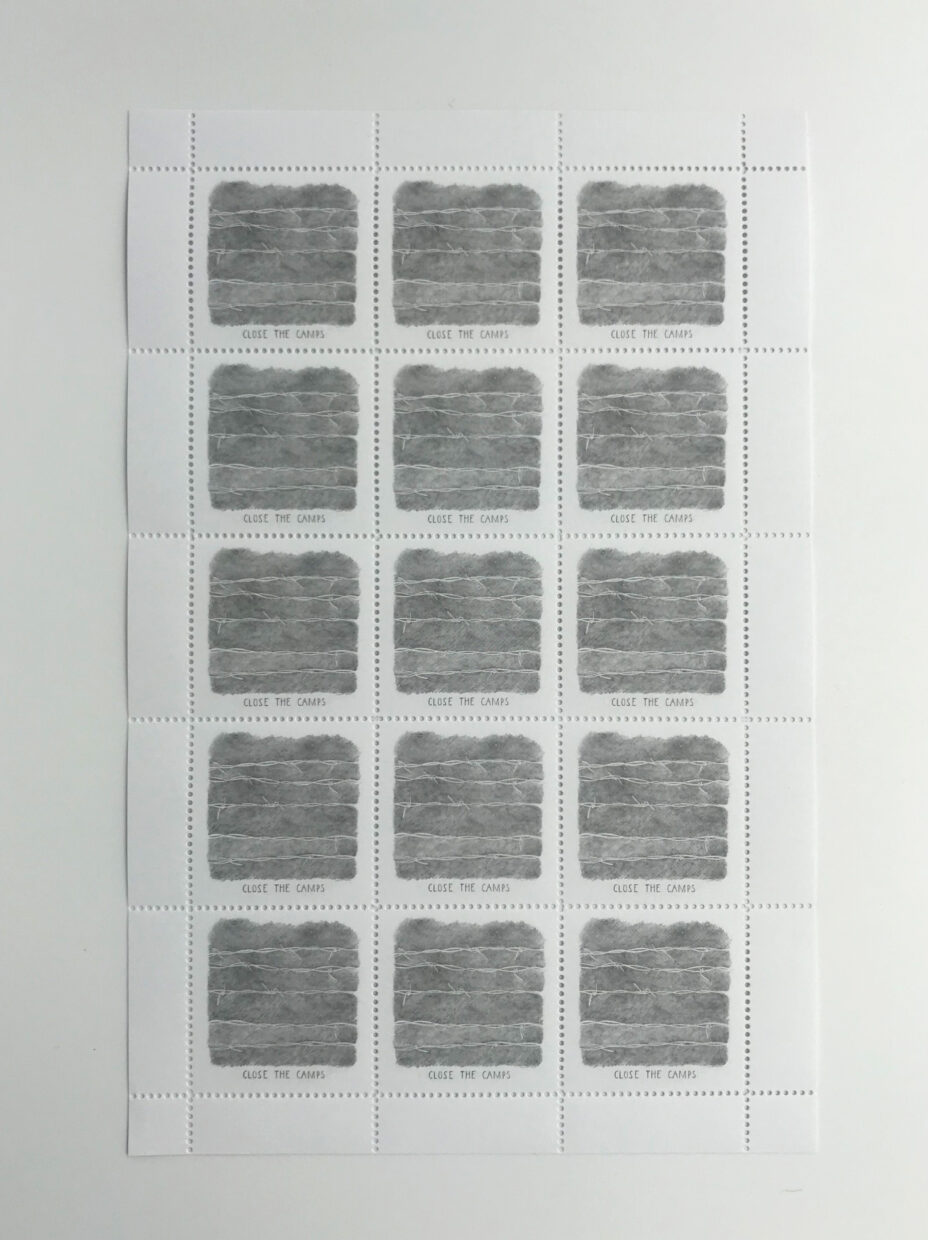 Close the Camps benefit sheet for Families Belong Together, $10 per sheet available at BuyOly.