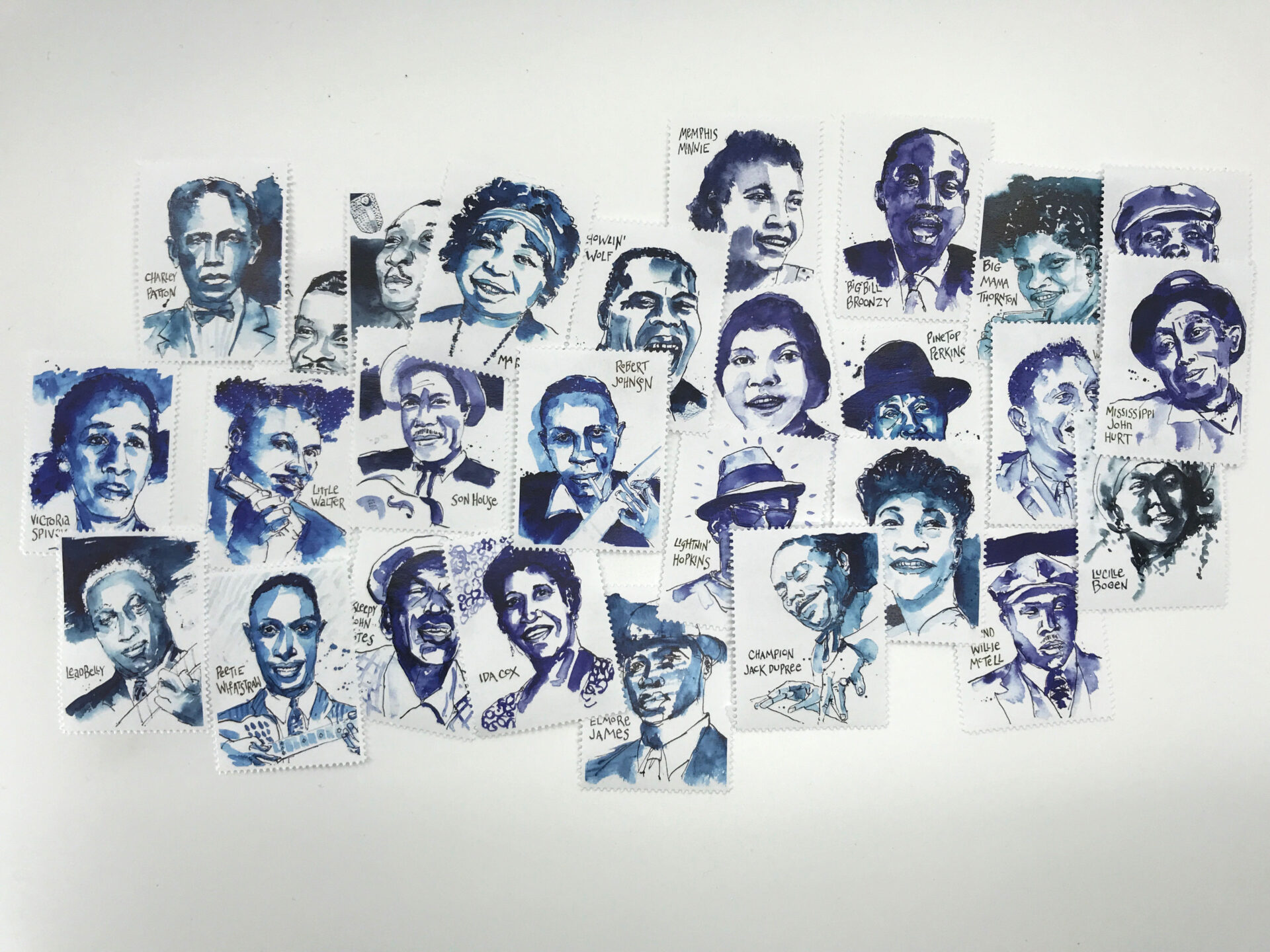 James Terman is a Boulder, Colorado based artist and designer. We met initially when he emailed us about creating a small version of our “By Snail” rubber stamp — which we did — since then, our correspondence has led to so much more, including this latest collaboration.

Have you designed a stamp before? How was this different?

When ordering a “By Snail” rubber stamp, I was intrigued by the idea of having my own stamps printed so I got in touch.

Drawing and painting abandoned and junked cars is something I’ve been doing for years, so I used a selection of those watercolors for my first stamp sheet. It was exciting for me to see the quality The Portland Stamp Company brought to the images at such a reduced size from the art. I was hooked.

The John Lewis portrait stamp was my second sheet, created from a painting I had done shortly after he died. That it was used as a fund-raiser with profits going to Fair Fight Action (founded by Stacey Abrams in Georgia) at the suggestion of Josh and Niko, made it even more satisfying. 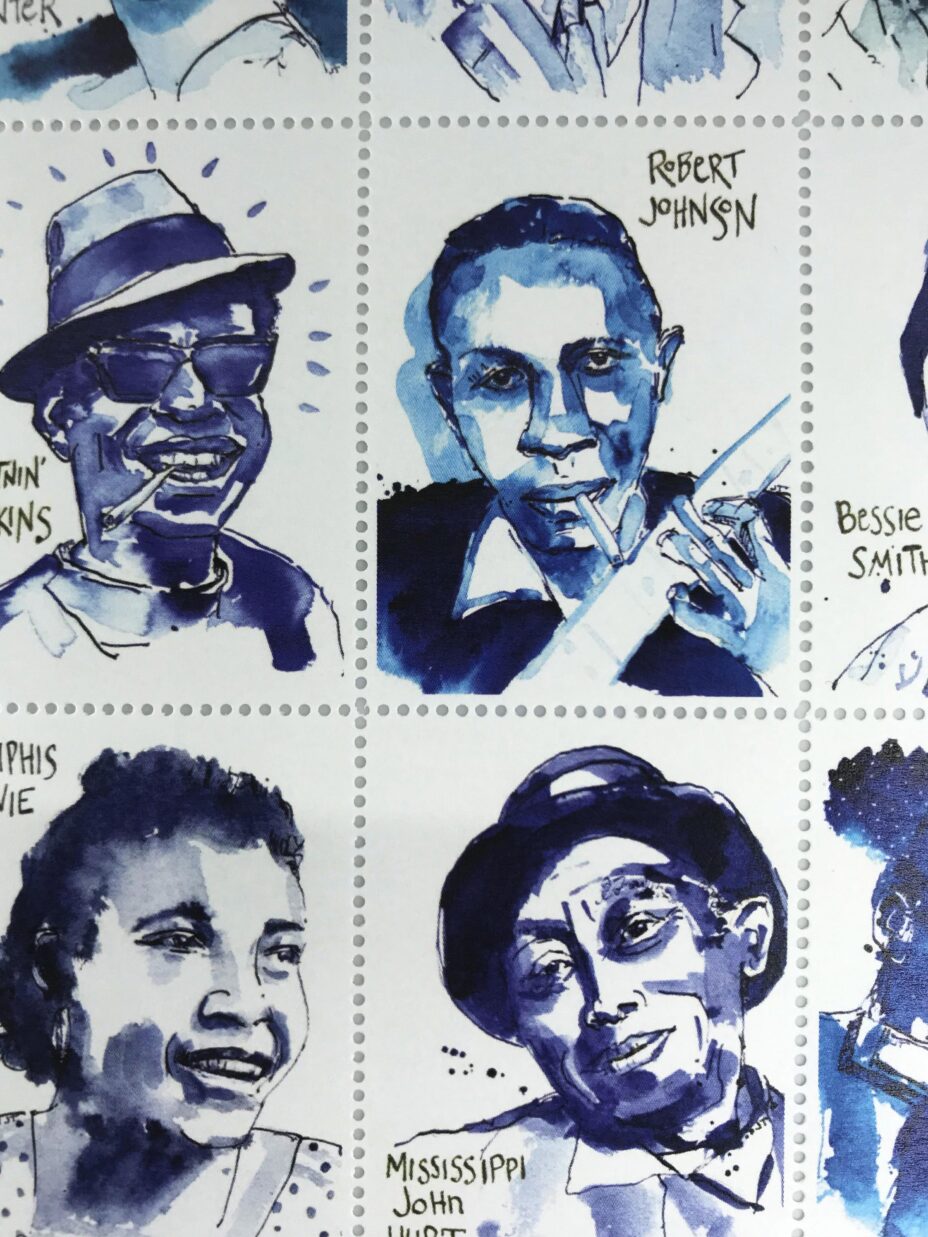 For “The Blues” Artist Series sheets, all portraits were created specifically for this project. Actually, when Josh saw my John Lewis portrait he originally suggested a series of portraits of civil rights leaders. My interest in jazz and the blues, though, led me in a musical direction. Niko is also a big blues fan and he seconded the idea. Painting all the portraits in shades of blue seemed appropriate.

As a kid I collected stamps and found them a portal to learning more about the subject or the country from which they came. I was reminded of that while researching blues musicians, and the blues in general, for this series. Plus, I could listen to their music while I painted their portraits. Drawing in clubs during live jazz and music performances is something I’m particularly fond of, so listening to the recordings of these artists while I painted made the project even more fun.

This set is a benefit for The Blues Foundation.

We also have four of these paintings available as archival print posters, and a limited number of NFT digital stamps — thanks for pulling me into the 21st century!

All posters and NFT sales also benefit the foundation.

Featured portraits in this set: 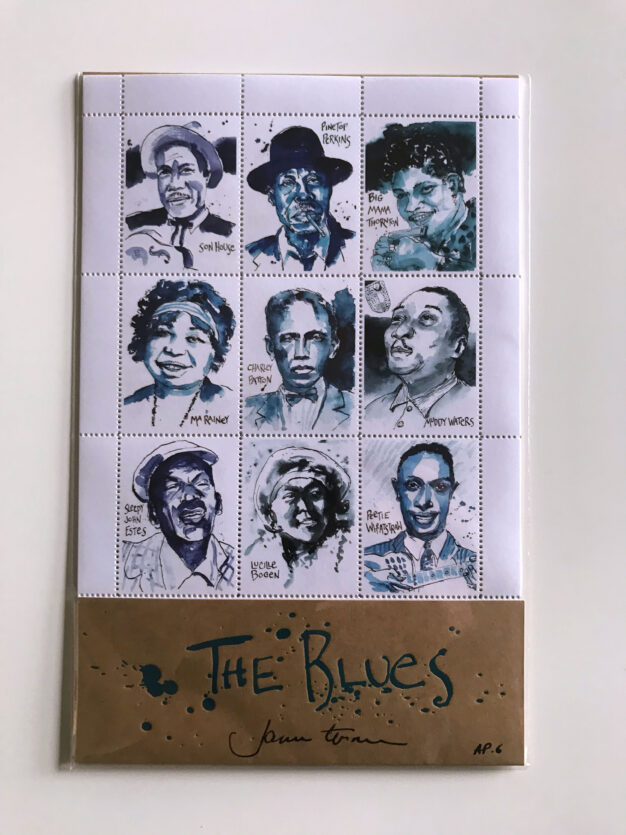 Perhaps you’ve heard of NFT art. Non-fungible tokens are the latest cryptocurrency phenomenon. Are they a fad? Who knows! But if digital art can be sold as cryptocurrency, we thought we better try digital stamps.

All 27 of James Terman’s blues portraits are now available as NFT stamps. We are minting a total of five sets of digital stamps and two of each individual stamp.

We’re big believers in the value of analog, so if you purchase a complete NFT set, you’ll receive the digital edition and a signed physical edition.

Already purchased the NFT set and looking to redeem your physical copy? Here’s that page. 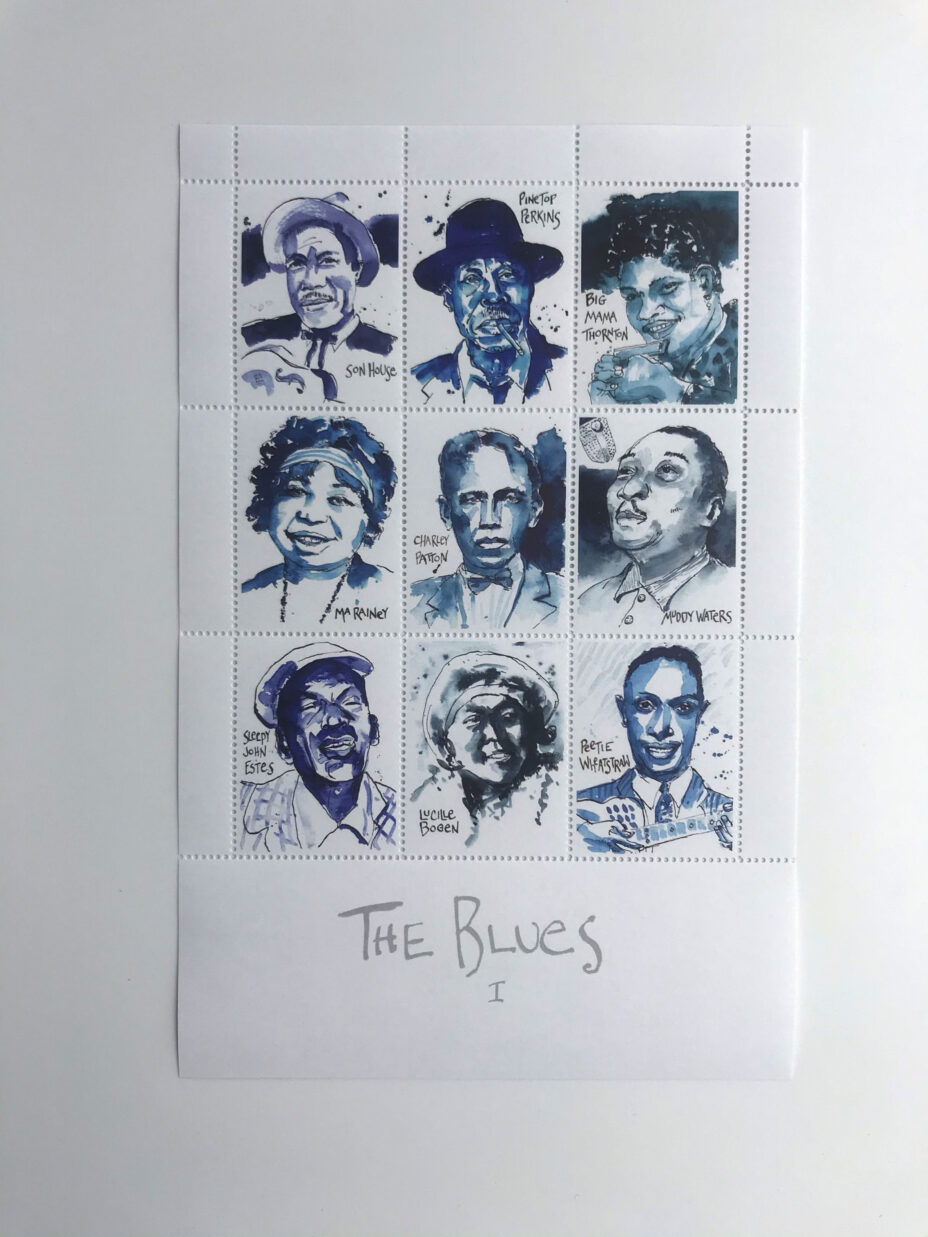 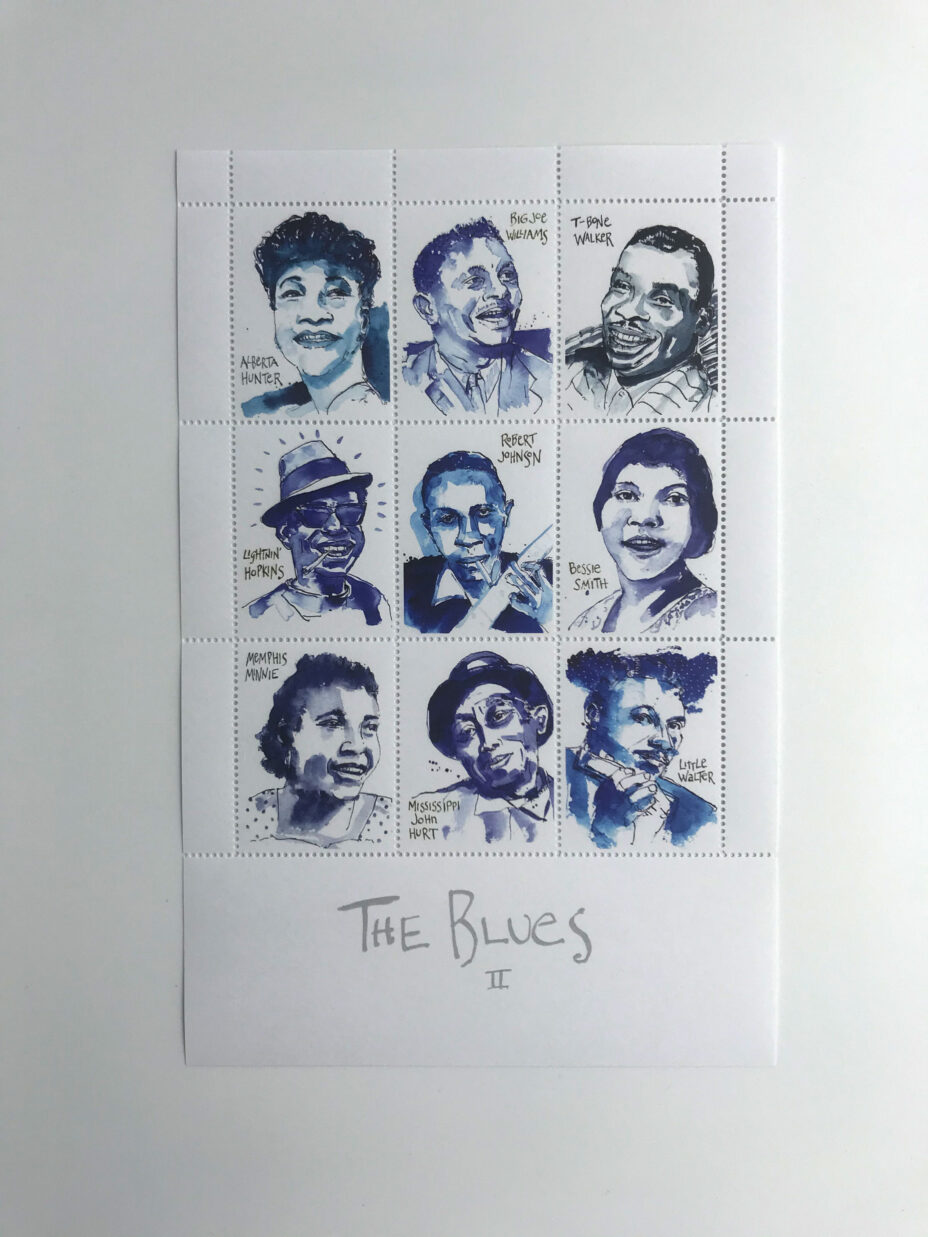 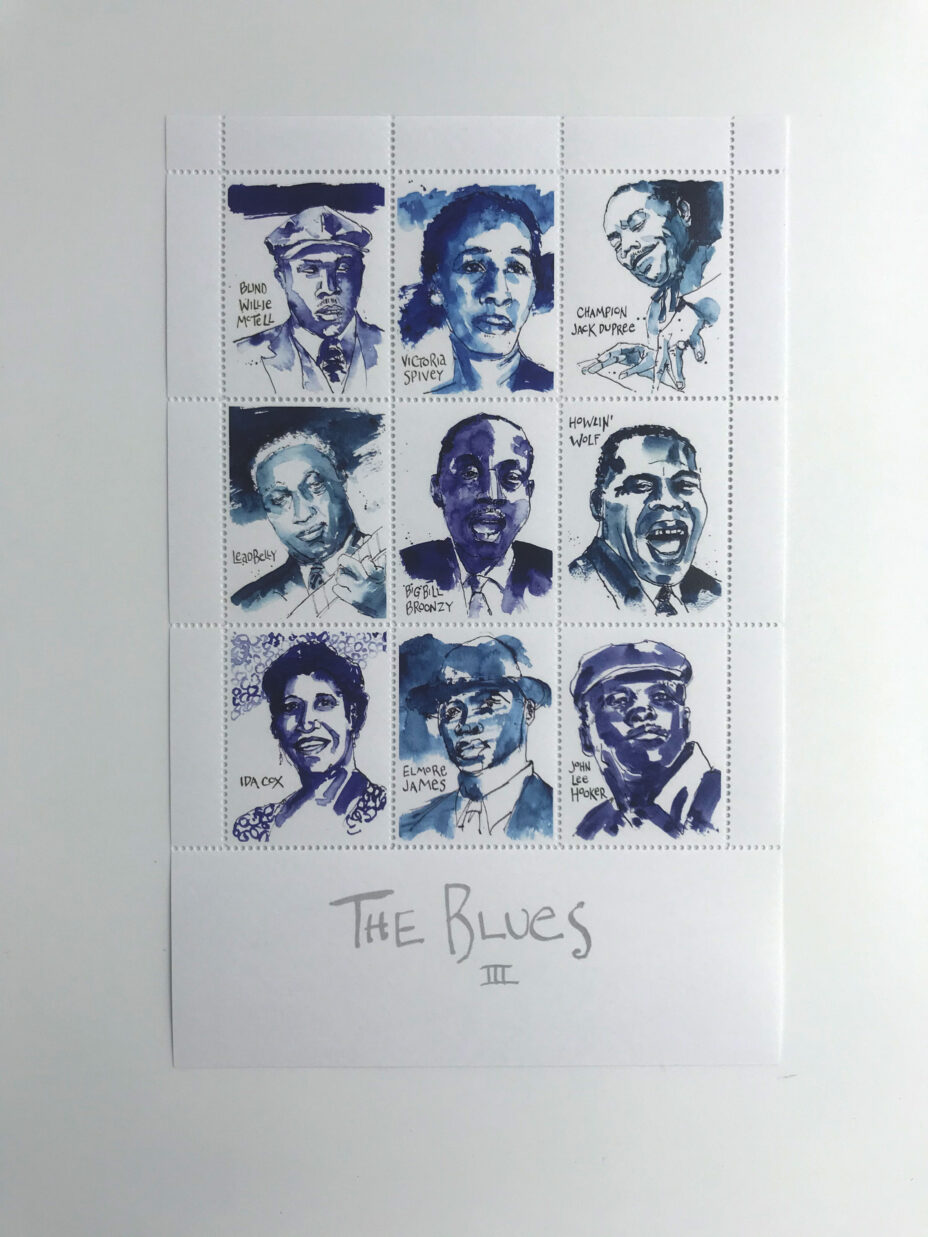