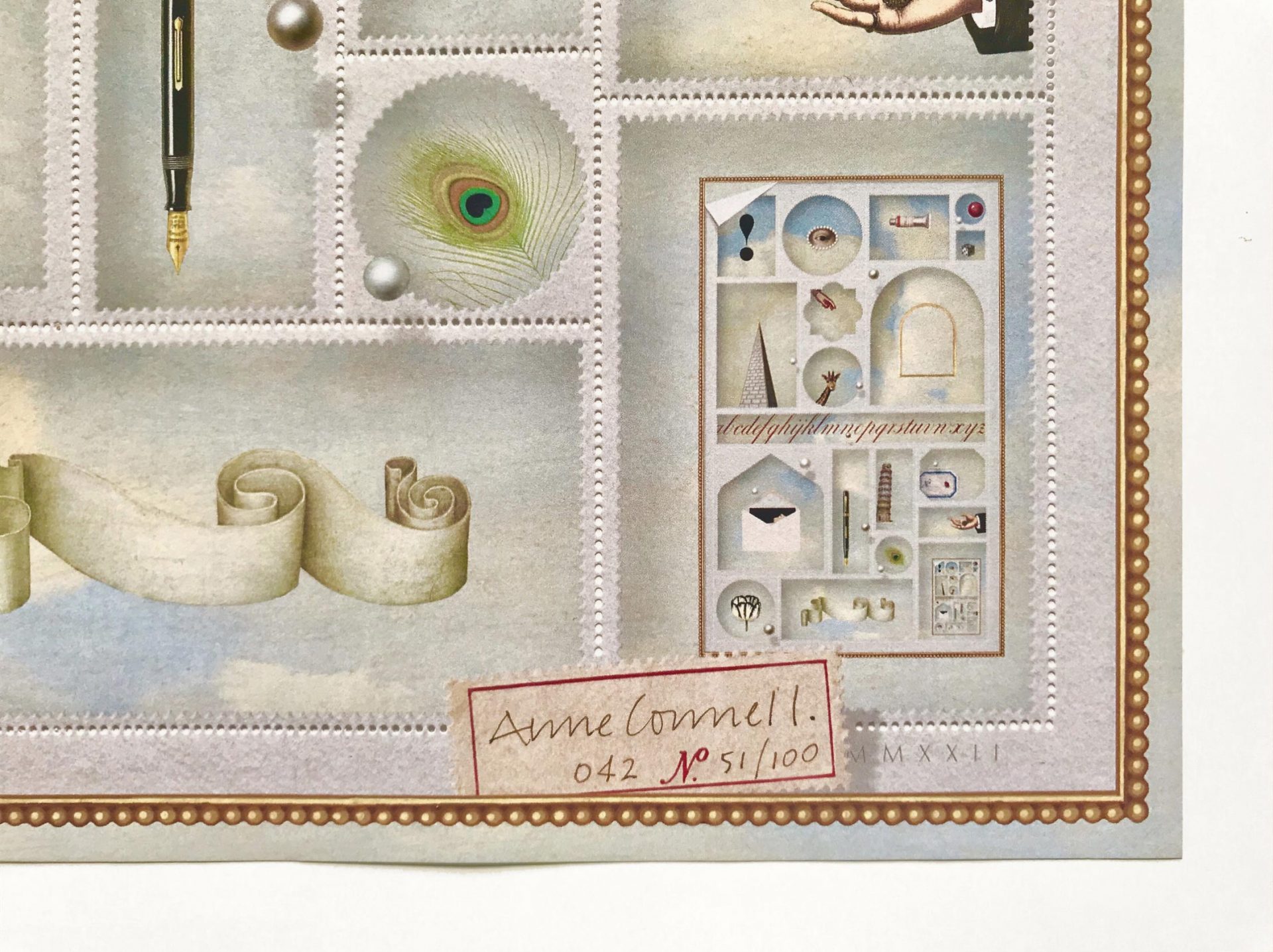 Anne Connell is an erstwhile painter and collagist who, owing to forces beyond her control and the vicissitudes of existence, has turned her creative energies (such as they are) to designing paper goods with an absurd attention to detail. She lives in Portland, Oregon, having fetched up there in the last century, and shares her space with a Pekingese mix named Pippa and a couple of budgies.

I had not. Over the years, however, I have incorporated stamps into mixed-media pieces (in which they are glued) and paintings (in which they are painted). Inasmuch as envelopes have been a recurrent motif in my work, it stands to reason that stamps, too, would appear. (Envelopes are evocative, suggestive objects; perhaps unsurprisingly, writers in particular tend to be drawn to my envelope pictures.) Having spent uncountable hours on this project, I’m keen to design more stamps.

In autumn 2021, when Josh asked me to contribute to this remarkable series, it comprised about three dozen contributions. As I began to think about what I might make, my first considerations were simply practical, as all my formal choices would arise from technical possibilities and constraints: What size sheet? A uniform grid of perforations, or something more idiosyncratic? A single repeated image, or multiple images? If the latter, would they lie entirely inside perforated boundaries, or be intersected by them? The PSCo.’s Artist Series archive, entirely perusable on this here website, served not only as a handy reference, but also informed my thinking about formal choices. [Side note: Early on, and purely out of curiosity, I asked Josh if anyone had ever submitted a project that lay outside the scope of his and Niko’s technical capabilities. “No,” he replied after a pause, “but you’re welcome to try.” I was absolutely not interested in stymieing the Master Perforators™, but I didn’t exactly make it easy on them, either—I went for idiosyncratic. My apologies, gentlemen.]

And so commenced a monthslong process of hunting, gathering, experimenting, juxtaposing, adjusting, appraising, rejecting, resizing, rearranging, doubting, dithering, finalizing, &c. &c. &c. I wanted to make something that was genuinely distinct from its predecessors, and I resolved that the idea of perforation would somehow be salient. Perforation, after all, is both the raison d’être and sine qua non of Messrs. Berger and Courtelis’s entire delightful enterprise. Respect must be paid; let’s make this thing meta. My painting practice had for some time been concerned with illusionism and its convergence with the picture plane’s intrinsic flatness; in several pictures, I fenestrated the picture plane with trompe l’oeil “windows” through which partial views beckoned. If I could fenestrate illusionistically, I reckoned, I could perforate illusionistically. QED.

(I’m afraid my answer to this pair of questions fails to identify “interesting” or “fun” aspects of my experience, or “unique challenges”—at least explicitly. [The questions are overly reductive!] How’s this: it was always challenging, frequently interesting, and occasionally fun.)

Did I ever—but with considerable self-appropriation and reference to several of my favorite motifs and formal ploys (which those familiar with my work should be able to readily identify). I wanted to make a sheet that was formally cohesive while intact, but whose individual segments would stand alone should they be detached. (Will anyone take apart the sheet, I wonder? I wish them luck with detaching the upper left and lower right stamps.) The image contains numerous visual rhymes, echoes, and correspondences (no pun intended), including at least one I didn’t even notice until much later; I leave it to the viewer/collector to spot them. I wish I could make a stop-action film of every incremental change it went through from alpha to omega; it would make for some truly mesmerizing and/or stultifying viewing.

Infinite [∞] thanks to Josh and Niko for giving me the opportunity to stretch and to feel like an artist again. En mijn dank aan het Rijksmuseum, Amsterdam, for permission to use a detail from “View of the Merwede off Dordrecht” (c. 1660; attributed to Jeronymus van Diest)—i.e., my Dutch-sky background. (Something there is about a Dutch sky.) Last but not least, prospective thanks to everyone who admires this effort, especially those who choose to acquire and live with it—may you always notice something new. 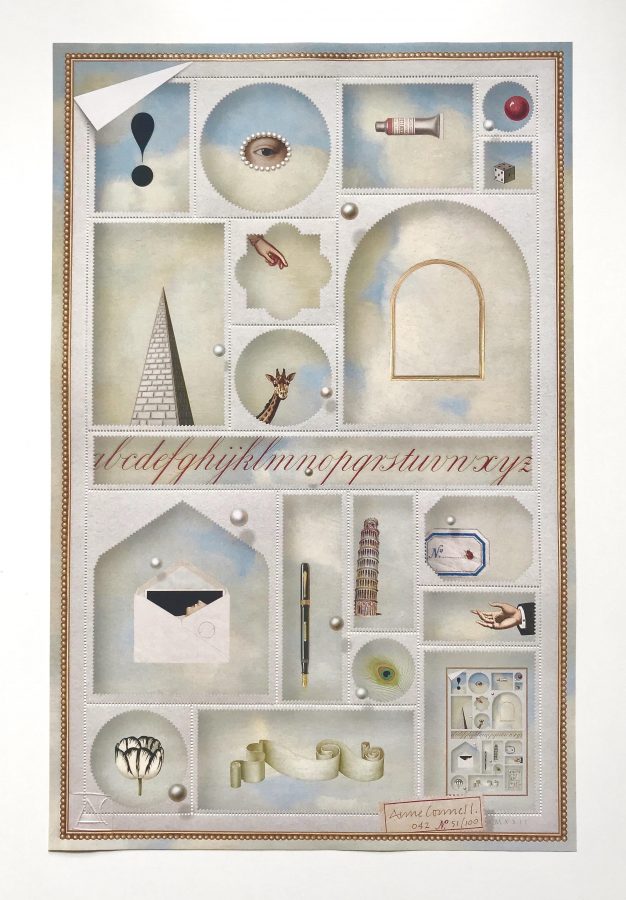 Sometimes the back of a stamp sheet is almost as interesting as the front! 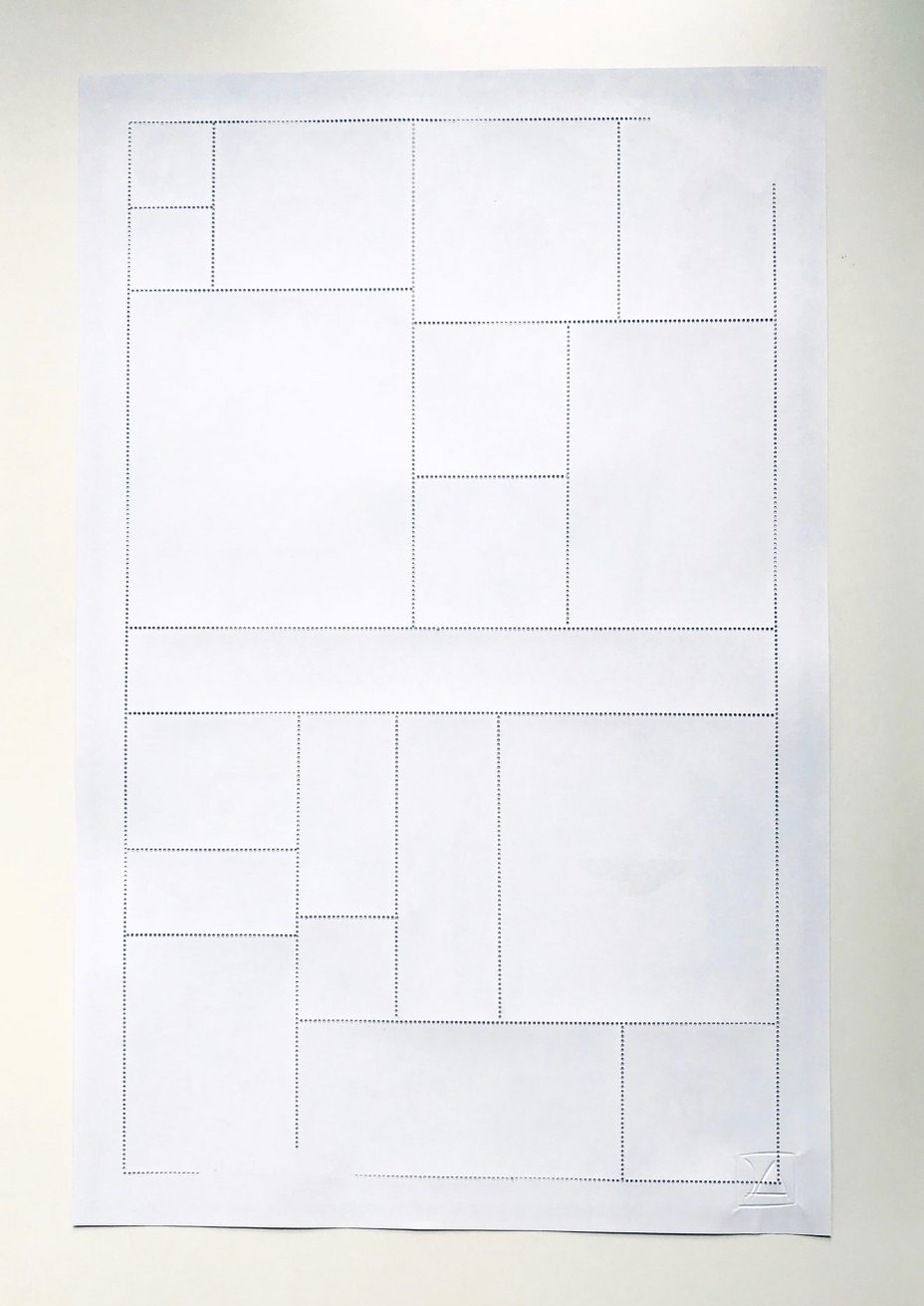 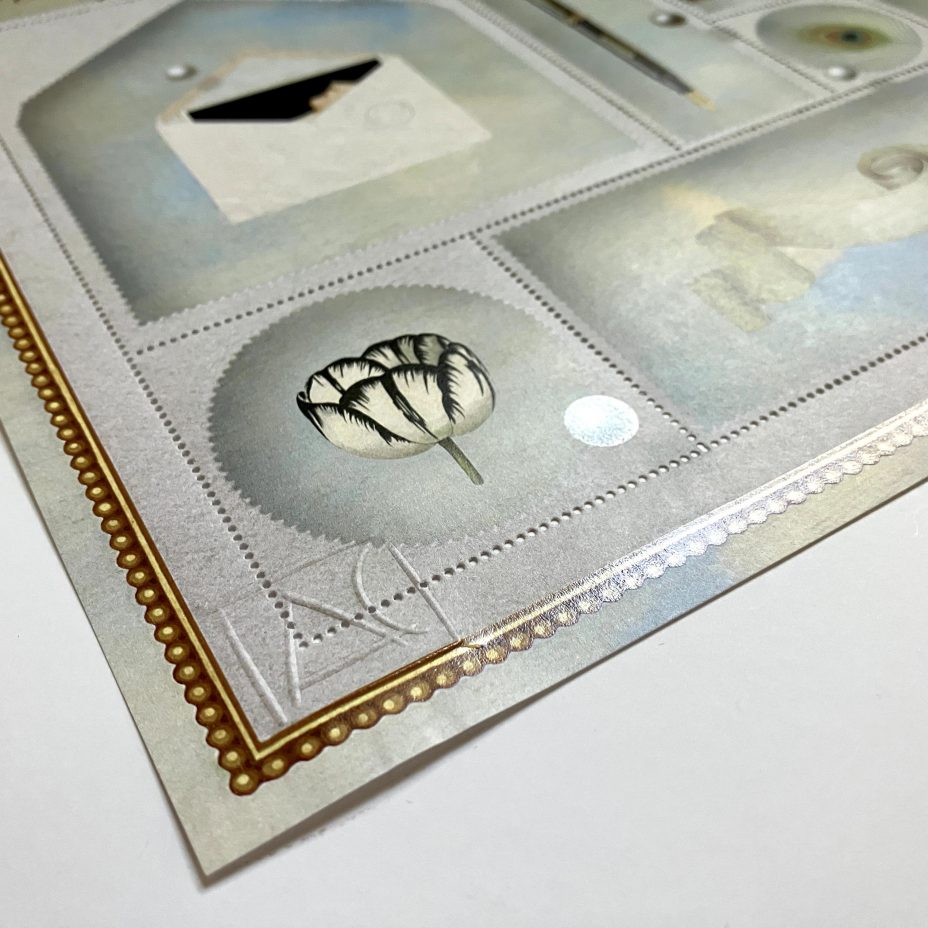